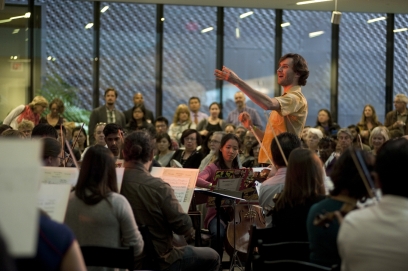 David Möschler (M.A., music, ’10) has created a successful if slightly unorthodox music career largely based on figuring out how he could have the musical life he wanted.

Since earning his degree, Möschler has conducted the San Francisco Civic Symphony and been music director of “The Simpson’s”-inspired play Mr. Burns: A Post-Electric Play at the American Conservatory Theater in San Francisco and Guthrie Theater in Minneapolis, and Stephen Sondheim’s A Little Night Music in Cape Cod. A few years ago, he also started an unusual musical ensemble called the Awesöme Orchestra.

“I’ve always been drawn to eclectic music—orchestral music that sounds like musical theatre and musical theatre that sounds orchestral,” said Möschler, who during the first few months of 2016 led performances of music by Jean Sibelius, Andrew Lloyd Weber, George Gershwin, Leonard Bernstein and Green Day, among others.

Studying at UC Davis let him explore many musics

The Awesöme Orchestra is made up of hobbyists and seasoned professionals playing everything from the standard orchestral repertoire to Bjork and “Malcolm X: A Hip-Hop Oratorio.” Most of Awesöme’s concerts are open rehearsals with 30 to 100 musicians, drawn from a pool of about 1,5000, performing for themselves and anyone who shows up. The group has played about 70 gigs of various sorts since Möschler started it in 2013.

Studying at UC Davis allowed Möschler to explore many different kinds of music and lead a variety of ensembles and musicians.

“The school gave me a really pragmatic and realistic idea of how to do this,” Möschler said. “I didn’t need to know how to conduct as much as I needed time in front of an orchestra conducting and I got that. I conducted the chorus, orchestra, concert band, the Empyrean Ensemble (contemporary music group), chamber groups and theatre and dance groups. I got to work with musicians of many skill levels like you find in the real world.”

Creating rich life in the arts

Like others starting out, Möschler couldn’t turn down many jobs early on, but it is possible to make the artistic life you desire, he said.

“I went after things I wanted and when they weren’t there I found a way to create them,” he said. “You have to find your people—those who want to go on the same kind of adventures you want. The more you surround yourself with like-minded artists, the more it will embolden you.

“Now I only take jobs I’m really interested in and right now I’m booked up through the winter of 2018.”